With FileZilla we can retrieve the files available on the anonymously accessible FTP server.

So we will need to decompile the jar, change the port and recompile it.

We may need to use Java 8, I have one if needed:

We will be able to use those creds.

In the beans.xml config file, we can retrieve the server connection information, a keystore, and a secret.

Let's change the port value form 8080 to 1337 in beans.xml and then update the jar archive. We also remove the files used for signature so Java doesn't complain beans.xml doesn't match the signature anymore.

Then we can run our patched version java -jar fatty-client-patched.jar.

But before, we need to add the local domain in our hosts file and to set Java 8.

Now we can log in and discover the fat client from a user point of view. 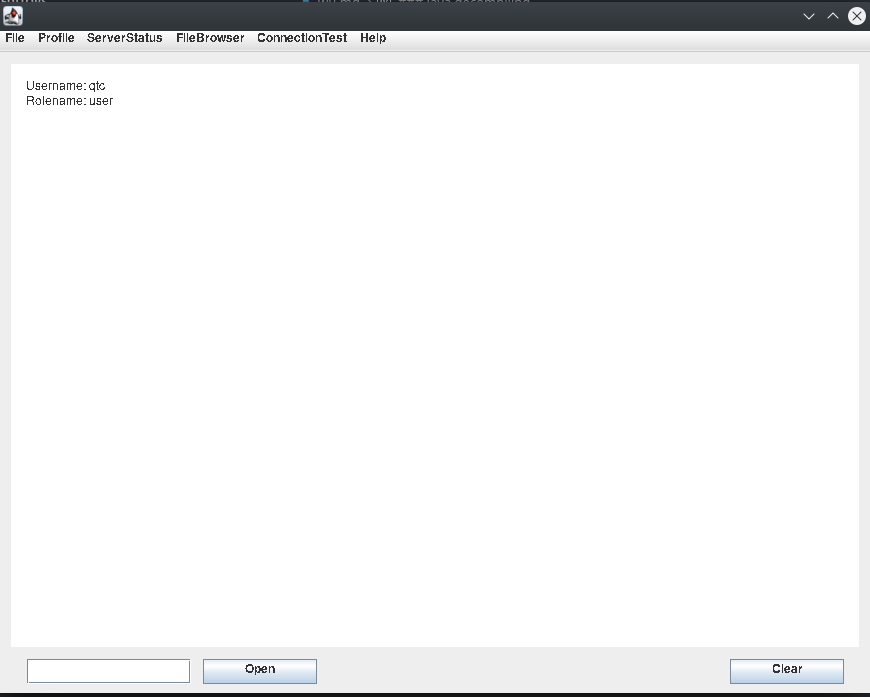 There is also an Open feature that read a file (seems to exclude comments), it seems it's not possible to do directory traversal but we can cd in the FileBrowser files and read them.

With JD-GUI or other decompiler we can decompile the code to read it. With jar -uf we can easily update a text file like beans.xml but we can't update code in the JAR because the code is compiled (.class). Trying to compile our .java won't probably do any good as there are not the original code but ones obtained through decompilation. So the best idea is to update the original JAR via a Java bytecode editor.

I used Recaf for that.

But still /opt/fatty/files prefix. Putting / in foldername is filtered server-side too.

Too see what's in that folder let's modify the function that list files in one folder, from:

So by going to FileBrowser -> Configs we can list what is in /opt/fatty/:

We now have the name of the server JAR: fatty-server.jar.

The server seems to be run as qtc so we won't elevate our privilege directly.

By doing the same with logs and tar we can see what's inside:

What we could access is /opt/fatty/fatty-server.jar but we can only read text files, not binaries:

So we will have to modify the function to save the file locally on our filesystem.

Let's try to add a method in /htb/fatty/shared/message/ResponseMessage.java

With one of those 3 ways we are able to dump binary files. Let's dump fatty-server.jar: 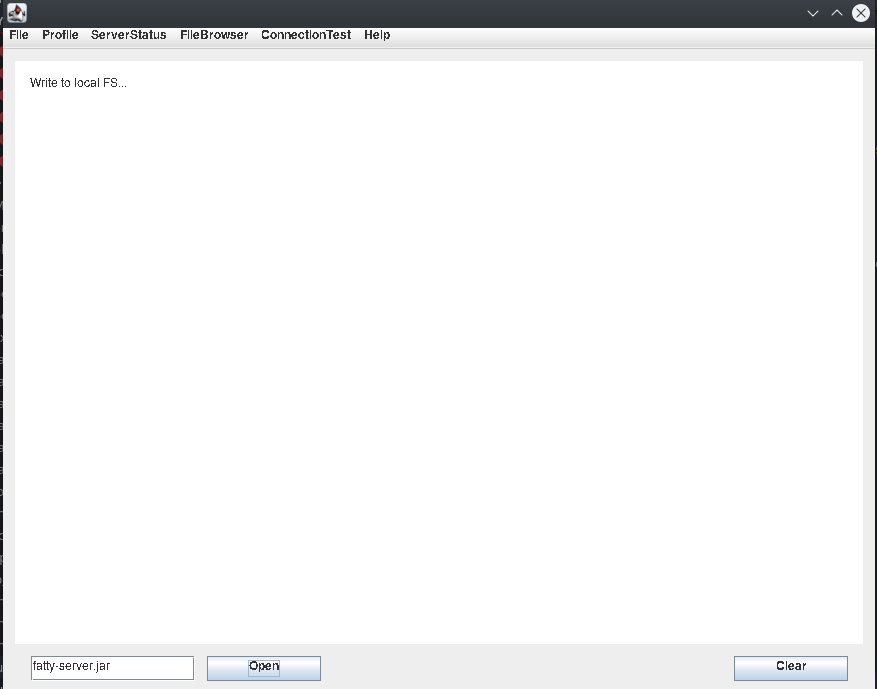 Now let's decompiler the server JAr with JD-GUI again and export the code to read it with VSCode.

It's maybe time to looks for the the SQLi, we already know it's in the connection code.

The SQL queries seem to be handle in htb/fatty/server/database/FattyDbSession.java.

We can see the Thread.sleep(3000L); that make time-based attacks difficult but that doesn't mean we can't make a one-shot SQLi as we still control the username injected in the query.

Before we forge a payload, let's take a look at the password format saved in DB. We can see in htb/fatty/shared/resources/User.java is salted and hashed.

We can also note that only password is checked and only username is used for user retrieval, that means we can inject whatever we want in the ID field or email address. But what matters to us is to change our role from user to admin.

So we end with the following payload

Once the payload is injected in the query this will give:

In htb/fatty/client/gui/ClientGuiTest.java we can see the password is set by the setPassword function we saw earlier.

We can also it in htb/fatty/shared/resources/User.java

Putting our payload as username and clarabibi as password should be ok.

My injection gave me login failed, so I tried something else:

But still failing, let's get back to setPassword:

this.username is used so since we're not providing only qtc anymore but our SQL payload, the calculated hash will be wrong.

So let's patch it into:

But I couldn't modify the User.java file this way because the dependency import javax.xml.bind.DatatypeConverter; was removed from Java 11+ and we are using Java 14 for recaf so if this file is touched it can't be recompiled by recaf unless you remove all references to DatatypeConverter.

So that's what I did, I removed the imported and change the whole setPassword function to the following and did the same in User class: 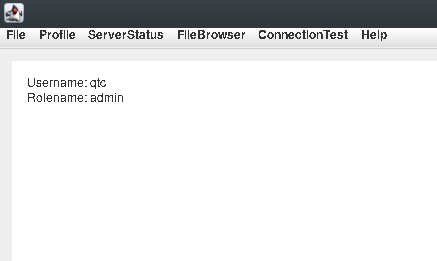 Now we can login with:

Now we have to look at a vuln in an admin-only feature. The only feature accepting an input is changePW.

We can see on the server that an object is create from the user input (User)oIn.readObject();.

There is an article an associated code repository explaining unserialize exploits in Java commons-collections library:

It seems we have the vulnerable class InvokerTransformer and commons-collection:

However we don't know which version of the library is used.

But if we try to send it with receive this error, telling us the code on the client is not totally finished. 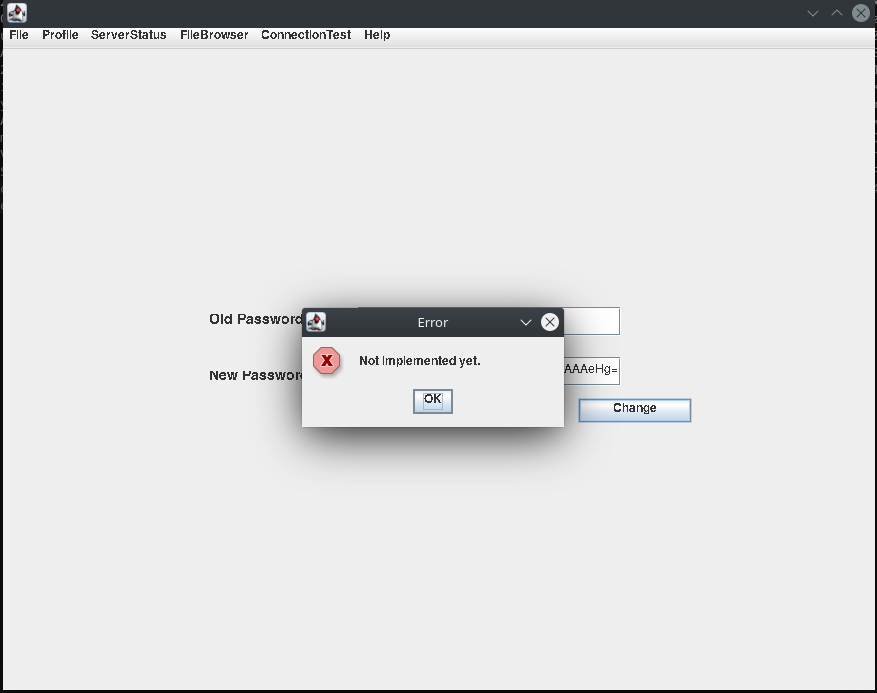 Let's see where do this error comes from:

The button is not mapped to changePW function.

So what we have to do is patch pwChangeButton.addActionListener and replace

But in the full constructor the password is hashed so we need to change it from:

But I always end with this error:

The error is hit in this chunk of code:

The user class is serializable:

but not the role class

As said in this stackOverflow post we either need to:

So I added implements Serializable on the Role class, now I don't have error on client side but instead Error: Failure while recovering the User object. because it's a shared library so the client can now serialize it but the server can't deserialize it as the shared library on server side remains untouched.

So I guess we will have to not serialize it. So I marked the field as

but I ended up with the same deserialization error.

Because the server expect a user object, I thought that anything else would be refused.

But in fact we should send our raw serialized payload without trying to package it as the password of the user object.

So here is the final client GUI modification:

And the final changePW modification:

In the first time I just generate my payload with a pingback to make sure it works.

Now let's try to get a reverse shell.

Awesome we get it:

Looks like the shell we can get are limiteds:

A Debian kernel on an Alpine distro? It highly seems like we are in a docker container:

There are some scheduled jobs:

Thanks to the backup directory we can read them:

There is a tar archive created from the logs, and we have permissions over the 2 folders:

I'll use pspy to try to catch some flash events.

Then start a web server to serve it:

Then on the target retrieve it and executes it:

After a few seconds we can see a scp that copies the tar archive that was created by the cron job.

It seems like a scp command is run from a remote host to retrieve /opt/fatty/tar/logs.tar, this must come from the docker host.

Something like that must be run from the docker host:

Ok, fasten your seat belt this is tricky.

We can guess that if a tarball is copied to the docker host automatically, then it may be automatically extracted too.

So I'll try to conduct this 2 steps attack that abuse of symbolic link in tarball when extracted.

One of the less dirty way to EoP to root by overriding a file would be to copy our SSH public key into root SSH authorized keys.

Then we wait for a few minutes to be sure that scp copy was done, we can start a 2nd reverse shell and lauch pspy again to be sure.

So the scp will copy the tarball to /path/on/host/logs.tar on the host.

Then it will extract it and use our malicious symlink: /path/on/host/logs.tar -> /root/.ssh/authorized_keys.

Then we copy our SSH pubkey to replace the tarball.

Then again we wait a few minutes or monitor pspy.

It will directly copy our key to /root/.ssh/authorized_keys thanks to our malicious symlink.

Then we can connect via ssh: